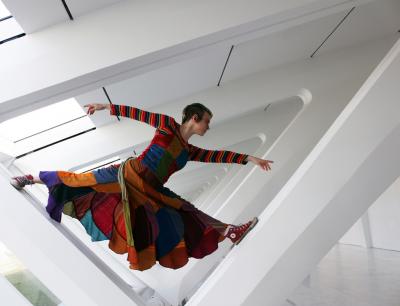 Tobi (aka Allison Daniel) is a physical performer with a rich background of training in Puppetry, Mime, Clown, Mask and Acrobatics. She attended  L’école Internationale de Théâtre LASSAAD in Brussels ( 2 year Lecoq based conservatory program with Lassaad Sadi and Norman Taylor) and is also graduate of the Flying Actors Conservatory program (James Donlon, Leonard Pitt), as well as Sandglass Puppetry manipulation intensive (Eric Bass, Ines Zeller Bass), and the Clown Conservatory program at Circus Center in San Francisco (Joe Dieffenbacher, Dan Griffiths) where she went on to teach.

While attending Illinois State University for scenic costume design she additionally created her own focus in puppetry design. Upon graduating she moved to Chicago and designed and built (as well as sometimes performing or directing) puppets for many of Chicago’s theatre companies includingThe Joffery ballet, The Marriott Theatre of Lincolnshire, Chicago Dramatist,  Blair Thomas  and Redmoon Theatre. The Puppets she builds are as varied as the performances for which they were created. She has built 7 inch tall musical mice, to a six and a half foot tall “space bear” body puppet, and many in between and beyond.

Her work in both performance and construction give her a world of possibilities and ideas to mix and match into a world of joy, insanity, and unique perspectives.